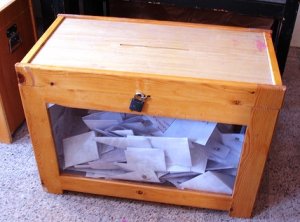 When Kenya’s Independent Electoral and Boundaries Commission published the location of voter registration centers around the country for the first time last month, it released this important information as a PDF, making it difficult for ordinary citizens to read.

Even professional infomediaries, like media and civil society organizations that gather and organize information, would only ever use a fraction of the content of the PDF.

Our pioneering Code4Kenya initiative immediately realized that the information trapped in the PDF was just too important to ignore. So, Code4Kenya’s lead developer David Lemayian and one of the initiative’s Data Fellows, Simeon Oriko, got to work. First, they liberated the information, by scraping the data from the PDF into an interactive spreadsheet. Then, they built the simple GotToVote! website on top of it.

The project took just 24 hours from start to finish, but the results speak for themselves: More than 2,500 people visited the website within hours of it going live, using it to find out where their nearest voting center is located and where they should register for the elections. Traffic to the site continues to grow as word about the resource spreads. Simple but powerful.

The experiment proves that:

So, how did we have the right people, in the right place, at the right time? The Code4Kenya project is a six-month experiment by the African Media Initiative (AMI) and the World Bank (WB) to try revolutionize the way that African journalists and civic activists use data. It does so by embedding Data Fellows into three of Kenya’s largest newsrooms, as well as one grassroots civic organization, to help kickstart experimentation with data-driven civic engagement and “utility news” tools. The embedded Fellows are supported by an external software development team. The whole program is managed by an extremely agile “think/do” tank - the Open Institute.

The Code4Kenya pilot has worked so well that AMI has just committed funding for the core team of developers for an additional 12 months. They will evolve, we hope, into a jAccelerator lab that will help fast-track data and digital experiments in African newsrooms, much like they did with the GotToVote! project.

Code4Kenya will build and roll out another 10 data-driven newsroom tools and services in the next couple of months. They include Africa’s first newsroom-driven open data portals, the continent’s first full-fledged data desks in newsrooms, and a series of apps or services to both help reporters do their jobs more effectively and help audiences better understand the news.

But you don’t have to wait until then to start experimenting yourself. All the data used on GotToVote! is freely available on another Code4Kenya project: the AfricaOpenData.org portal, which despite being in early beta phase (still without a logo or proper graphic design) has in just two short months grown into the continent’s largest repository of public data, ranging from government budget information to data about parliamentarians and other public officials.