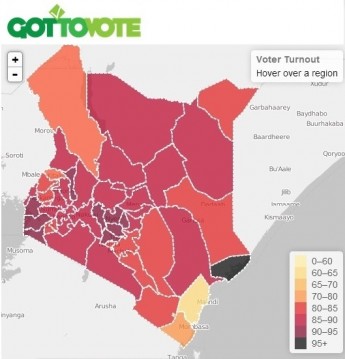 Kenya’s hotly contested 2013 presidential election saw a record turnout. This peaceful transition of power contrasted dramatically with the violence that followed the 2007 election.

One key reason: the amazing work of a team of African journalists and Web developers. With our help, they created a website called GotToVote! By harnessing the power of open data, this new tool helped thousands of Kenyans find polling booths, register to vote and report fraud. They could even send free text messages thanking each other for keeping the peace.

The site became an instant hit on social media, with 2,500 visits within hours of launching.

The impact was tremendous. A record 12.3 million citizens turned out at the polls, versus 9.9 million in 2007. No doubt, GotToVote! played an important role by encouraging civic engagement in Kenya’s democratic process.

The tool took only 24 hours to develop—and cost a mere $500. Make a contribution to ICFJ and your donation, too, will have genuine impact. You can help us develop programs that improve societies worldwide through quality journalism. We appreciate your backing.